TOC has also found wide acceptance in the biotechnology industry to assist in the validation cleaning procedures, especially clean-in-place (CIP). TOC concentration levels can be used to track the success of these cleaning procedures.

Since the relationship between Biological Oxygen Demand (BOD), Chemical Oxygen Demand (COD), and TOC was established in the 1970s, TOC analyzers have become an analytical backbone in many water treatment and quality control laboratories worldwide. In environmental applications, TOC is an essential environmental parameter used to measure wastewater from municipal and industrial sources.

TOC has a long history as being a world-renowned analytical technique to measure water quality during the drinking water purification process. Before source water is treated for disinfection, TOC provides an important role in quantifying the amount of natural organic matter (NOM) in the water source. Many researchers have determined that higher levels of NOM in source water during the disinfection process will increase the amount of carcinogens, called disinfection by-products (DBPs), in the processed drinking water. Today, Environmental Protection Agencies regulate the trace limits of DBPs in drinking water. In recent methods, such as USEPA method 415.3, D/DBP rule, the amount of NOM is regulated to prevent the formation of DBPs in finished waters.

Total Carbon (TC) - The measure of all the carbon in the sample, both inorganic and organic, as a single parameter. Generally, the measurement is made by placing the sample directly into the analyzer without pretreatment.

Total Organic Carbon (TOC) - The sum of all the organic carbon in the sample.

Direct TOC Measurement - In the direct approach, inorganic carbon is first removed by acidification and sparging, and the remaining carbon is measured as TOC. Inorganic and purgeable organic carbon are not recovered for further analysis in this approach. However, since POC generally represents 1% or less of total carbon in a sample, it is considered negligible.

Inorganic Carbon (IC) - Includes carbonate, bicarbonate, and dissolved carbon dioxide. IC is analyzed in liquid samples by acidifying with an inorganic acid to pH 3 or lower, and then sparging with a stream of inert gas. The acidification converts carbonates and bicarbonates to carbon dioxide, which is then removed along with dissolved CO2 by the gas stream, and measured to provide an IC value.

Purgeable Organic Carbon (POC) - Volatile and semi volatile organic materials sparged from a sample. However, these materials are generally less than 1% of total carbon in a sample. 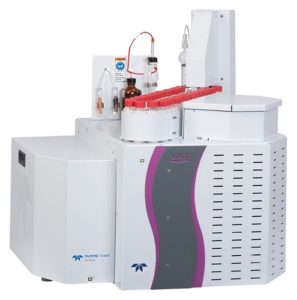 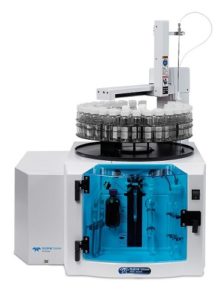